A few weeks ago a friend of mine asked me: “What do you do with AI at Lenovo?”  Well, the truth is a lot of things but one of the more exciting projects we’ve been working on is a machine learning platform for the enterprise and HPC (High Performance Computing, also known as supercomputing). This platform really simplifies the AI and machine learning workflow and enables many users at an organization to utilize a shared computing resource, whether it’s a single machine or a scale-out cluster of servers. GPU resources are in big demand today and can be very costly to rent by the hour in the public cloud. The Lenovo LiCO solution lets organizations share these resources with anyone who needs access and the result is a much more cost-effective way to train AI and ML models.

My colleague at Lenovo, David Ellison, did a great write-up on the features of the LiCO software and I’d like to share it with you here:

This paper is intended for AI decision-makers who have a basic understanding of the types of solutions that would be helpful to their organization. It includes sections that system administrators and data scientists will find particularly useful, but no particular knowledge in either of those fields is assumed.

Typically, a powerful system with multiple top-of-the-line GPUs and CPUs is deployed for each data scientist, which is effective for model training but will be overkill for most of the overall development lifecycle. These systems are also difficult to share amongst the data science team, resulting in both lower resource utilization and less efficiency for the data scientists.

To keep pace with performance demands, the business needs to continually upgrade to the best-in-class systems for their data scientists, and retire the previous systems. The result: continually paying high prices for “bleeding edge” systems which are quickly obsolete and relatively poor return on investment (ROI).

In contrast, scale-out solutions utilizing a cluster of systems can be easily expanded as both performance needs and the number of workloads grow. In this situation, the data science team is able to efficiently share a large pool of computing resources which improves utilization, efficiency, enables performance scaling, and a results in better ROI.

The only issue with a scale-out scenario is that a cluster can be hard to use for AI applications. Enter LiCO. LiCO’s intuitive interface helps simplify managing resources in the cluster for system administrators and running of AI jobs for, data scientists, and AI engineers.

Figure 1. Administrator View for LiCO (click the image to see a larger version)

Additionally, LiCO provides a number of more detailed tools to manage users and cluster resources. The Administrator can use LiCO to manage system access by setting user groups and users. A key feature for many clients is the ability to establish billing rates for various resources and groups – for example, establishing a base cost for CPU usage time. The administrator can meter usage among various groups within the organization in an automated and quantitative fashion. For management of the physical cluster components, the administrator can drill down into a more detailed view of cluster resources, including the CPU utilization, power consumption, and GPU usage.

The AI workflow is characterized by a large number of inter-related tasks – later tasks often improve the results of earlier tasks as more data is processed. Let’s explore the various stages of the AI workflow in more detail and see where and how LiCO fits in this process. 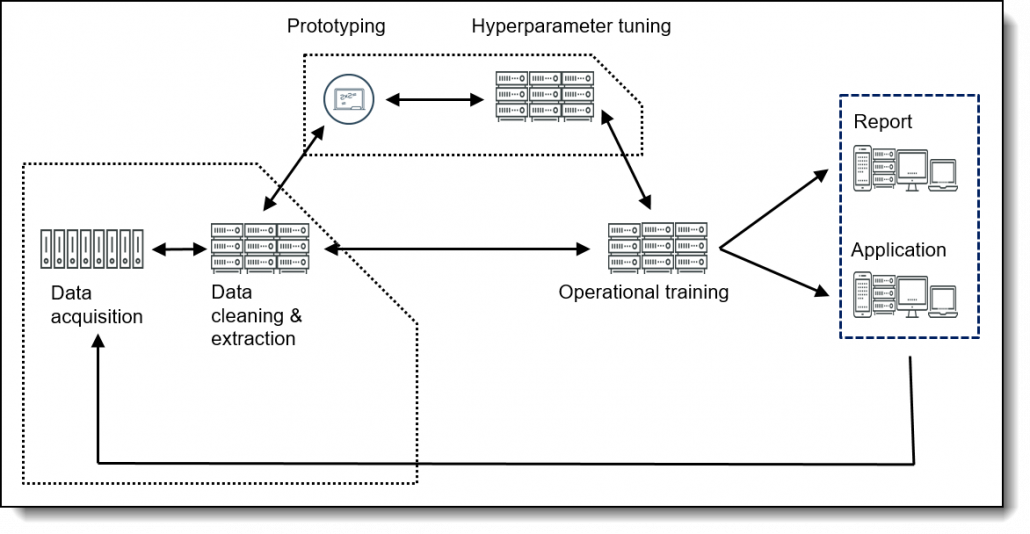 The stages of the AI workflow are as follows:

LiCO enables the use of both CPUs and GPUs as needed during the AI workflow. Significant emphasis is placed on the parts of the AI workflow where GPUs greatly accelerate the process, such as in hyperparameter tuning and operational training. However, the remaining tasks in the workflow generally rely on CPU power. A balanced cluster that has the appropriate ratio of CPUs to GPUs will not only return the greatest ROI on the equipment but also provide a superior user experience for the AI team.

For example, when developing a new model, significant CPU power will be used in the data cleaning step, typically the second longest task in the workflow. For inferencing and reporting, the longest task of successful projects, CPUs are also almost exclusively used. LiCO uses a single interface to manage both the CPUs and GPUs in a cluster to achieve maximal usage and performance.

What LiCO is not

It can be confusing to sift through all the available data science tools to put together the set that works for your company. We are extremely proud of LiCO, (it was chosen as Best AI Product or Technology by HPCWire in 2018). However, it is not a “do-it-all” solution.

Although LiCO does not handle these pieces of the AI workflow, it is designed to work with all of the technologies to be an essential part of a complete solution. Overall LiCO is a tool that simplifies hyperparameter tuning and operationalization of deep neural networks to help you turn move prototypes to production as effectively as possible.

The following frameworks are among the most commonly used tools for programming deep learning applications:

Data scientists and AI engineers using LiCO to run training and inference workloads will have the user role type and have access to the User home screen. The User home screen provides an overview of resource usage, showing the status and number of jobs, CPU and GPU utilization, memory usage, and network speed.

Managing the environment needed to run both machine learning and deep learning applications can be a major challenge. Especially when the user attempts to do this in a multi-tenant environment, simply getting a job to run in the correctly configured environment proves problematic. To solve this problem LiCO leverages Singularity. The user can download any of a number of popular Singularity containers from Singularity Hub or using a single pull command can import Docker containers into Singularity from Docker Hub. This is a powerful tool that allows data scientists and AI engineers to update AI frameworks, add new frameworks quickly, and effectively manage a multi-tenant environment.

Users also have the ability to create and run job templates. The TensorFlow Multinode template is shown below:

Figure 3. Template to run TensorFlow (click the image to see a larger version)

Job templates allow users to run AI & HPC workloads in a simplified manner. For example, the TensorFlow Single Node template, which enables the running of AI jobs written with TensorFlow to run on a single node. This template is useful for fast prototyping of new deep learning models – simply select the code, the containerized environment, CPUs or GPUs, and the template will run the job. Another standard template is TensorFlow Multinode, which allows for the distributed training of TensorFlow jobs. This template is useful for more developed models that have been programmed to run in a multi-node format. After running a TensorFlow job (using either Single Node or Multinode template), the user has ability to view the logs and TensorBoard (if created within their code) from within LiCO to view commonly recorded metrics such as accuracy and loss.

TensorFlow is just one of the many job templates available within LiCO. Other AI job templates include Caffe, Intel Caffe, MXNet Single Node, MXNet Multinode, and Neon. These job templates allow users access to most of the popular AI frameworks within LiCO, without having to manually configure the software on the systems. For HPC users, job templates include popular workloads such as MPI, ANSYS, and COMSOL. Additionally, there are options to submit shell scripts and SLURM jobs or even make custom templates with custom parameters to satisfy the needs of any use case.

LiCO provides additional functionality for Caffe users in the form of a workflow template. This covers additional aspects of the testing and development lifecycle not covered in the job templates discussed above. The user can begin by uploading a dataset in which they can view the division of the data into training, testing, and validation datasets and the class balance. Next, the user can view and edit network topologies written in Caffe, such as AlexNet and LeNet. Additionally, in order to confirm the edited network topology, this template offers a tool that allows the user to conveniently visualize the network. Finally, there is a models section, in which the user can view previously run models and see if they were successful or not.

If the user clicks into the Caffe model, they additionally can view the training accuracy, loss, and processing speed by epoch number (see below). This allows the user to see the effectiveness of his model in real time. From this screen, the user can also quickly re-run the model or alter the hyperparameters as needed. This allows the data scientist to write the base model, and then pass off the hyperparameter tuning to a junior data scientist or analyst. This workflow template provides the framework with which to modify many common hyperparameters such as learning rate, decay rate, and regularization type. LiCO also automatically records the experiments via job tracking, saving valuable time.

For more developed models that are able to run in multi-node format, the AI engineer can re-run jobs in order to determine the appropriate resources to allocate for the retraining of AI workloads.

Image Classification is a task in which a dataset containing images of primarily one class (e.g. a plane, a dog, a car) is provided to the model, and the AI model determines the class of that image. Popular datasets such as ImageNet are processed primarily via image classification workloads.

Object Detection is a step beyond image classification, in that it not only identifies the class (e.g. a plane, a dog, a car) but also identifies a region of interest or bounding box around that class. This allows object detection algorithms to identify multiple classes within the same image.

Image Segmentation goes a step further and divides the entire image, on a pixel by pixel basis, into classes. In this case, not only the main objects are detected, but also the background objects (e.g. grass, sand, road). This becomes increasingly important as algorithms are attempting to understand the context and situation within an image.

There are also two non-image-based templates included with Lenovo Accelerated AI – Seq2Seq and Memory Network. Seq2Seq is commonly used to translate from one language to another. This is done through the use of a recurrent neural network composed of a specific type of nodes called Long Short-Term Memory nodes. The other template, a Memory Network, frames the NLP as a question and answer the problem and is useful for applications such as chatbots.

With Lenovo Accelerated AI templates, LiCO greatly reduces the barriers to entry to perform AI experimentation. Non-technical users or those just beginning their AI journey can perform training or inference on datasets, without the need to code. This further increases the ability to utilize the HPC cluster and gain value from the hardware ecosystem.

Finally, Lenovo Accelerated AI supports users with a limited technical background in AI by providing easy-to-use templates that can perform training or inference without the need to code.